Disclaimer: This post is made as an entry for PS Asia’s PS Plus Junior Reporter competition. The points and views raised in the review however are not affected in any way.

Otherwise known as Persona 4 ULTIMAX Ultra Suplex Hold in Japan, this is the sequel to Persona 4 Arena, a spin-off fighting game based on the hit RPG Persona 4, released in 2009 on the PS2. The current Persona series has grown in mainstream popularity lately, starting with Persona 3 introducing an ooze of style not seen in other RPGs. Something of an oddity since the first two entries are brooding, dark, and to my seven-year-old self, a super scary looking game. Now there’s even a rhythm game spin-off with the main cast doing sick dance moves.

That aside, Persona 4 Arena is indeed a very good fighter. Made by the masters of 2D anime fighter Arc System Works (BlazBlue, Guilty Gear), they have carefully adapted the lore of Persona to fit into a blend of 2D fighter they are famous for. Persona 4 Arena Ultimax (P4AU) can be passed on as one of those update titles fighting games used to do (think Ultra Marvel Vs Capcom, Super Street Fighter IV Arcade Edition). But it is indeed a full-fledged sequel, in some ways.

Is P4AU worth playing for the die-hard pros of fighters? What about the people who have nary a knowledge of fighters but are so into Persona 4 and 3? The answer is: both parties can enjoy! 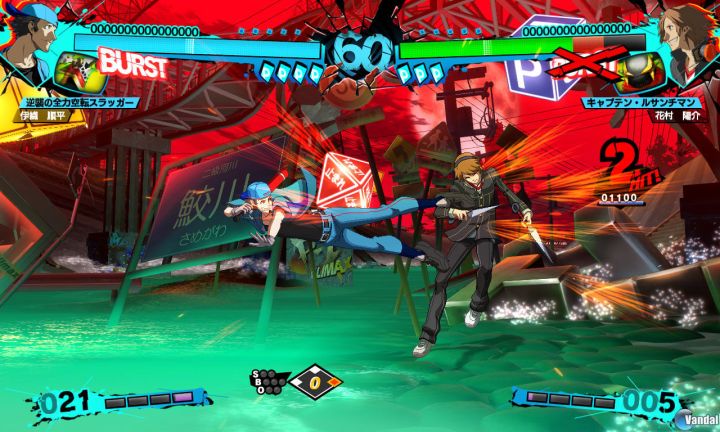 P4AU is just oozes in style. If you’re not hooked yet with its blend of visual aesthetics, then it’s hard for me to understand, because it is just charming as heck. I am not into anime and manga as most people would but what Persona presents is something hard to not catch an eye and ear on. All the visual fidelity: from the UI elements, menus, background animations on the menus, to the beautifully animated 2D sprites of each character, a lot of the details remains intact and faithfully feels like Persona.

Sound is on point. The ringing sounds of UI elements. The availability of most of composer Shoji Meguro’s hard-hitting soundtrack from Persona 4, as well as decent new remixes to boot. However, if you’re not a fan of the many overlapping and overbearing voice-overs, then it will annoy you form time to time. In short, if you adore everything about the Persona’s current aesthetics, you’ll love a lot of what you see and hear over the course of the game. A lot. 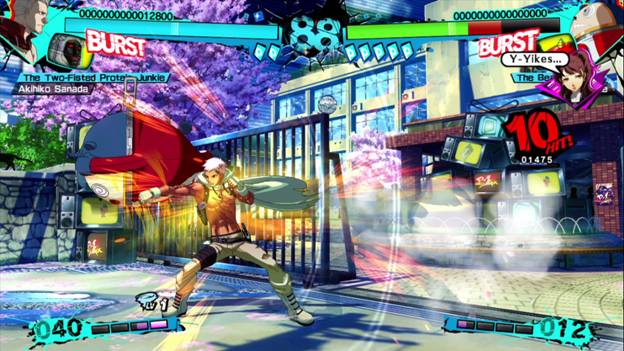 I have never played any of Arc System Works’s games, but heard and read a lot of them. It utilises a 4 button system, light attack, strong attack, light persona attack, and hard persona attack. Or A B C D for the seasoned player. (Note: Personas are the alter-egos/stands/monster-beings you can summon). With that 4 button, a lot of the systems involve using two or three button combination to activate. A C is for  evasion and hops. B D is for universal launchers/dragon punches. C D is throw and A B can initiate an all out attack- a staple comical move of Persona. There’s also moves using three buttons, the burst (B C D) and one more cancel (A B C), also mapped to L3 and R3. B D and A C are mapped to L1 and R1 respectively, as that combo of buttons can be hard to pull for pad players.

There’s a lesson mode that runs down all the systems and how to input them. As the last paragraph is of any indication, the systems are deep and complex. For some reason they managed to squeeze in status ailments too, on top of the already complex meter management and persona management- yes, personas can be disabled and have to be managed as well.

Good news for button mashers, with all these complex systems they also introduced auto-combos. While combos can be discovered by finding the right line of normals and specials (called skills in P4AU, which can be in the form of magic or moves lifted from the main game), by mashing A continuously it will execute a pretty strong combo.

The list of characters are OK for a fighter game, and while the roster is not super expansive, each of them plays differently, even the boss character and what you would assume to be another clone of himself. There are keepaway characters that rely on buffs like Yukiko, focused grapplers with command grabs (Kanji) and others with weird gimmicks (Naoto’s instant death spell of Hamaon and Mudoon once opponent’s fate counter reaches zero).

The best thing about it is if you’re already invested in the Persona lore, it all makes sense. Chie’s instant kill attack is obviously the Galactic Punt. Of course Naoto’s gimmick would involve the Hama Mudo spells. Of course Yosuke can inflict confusion with Tentarofoo. But for P3 fans it gets more interesting. As the timeline now has passed a few years, the characters now aged up. Akihiko is a full-on boxer. Newcomers Junpei and Yukari have careers as a baseball coach and a power ranger actress respectively. Little boy Ken is now a teen with Koromaru the dog now sporting a puffy jacket with wings. 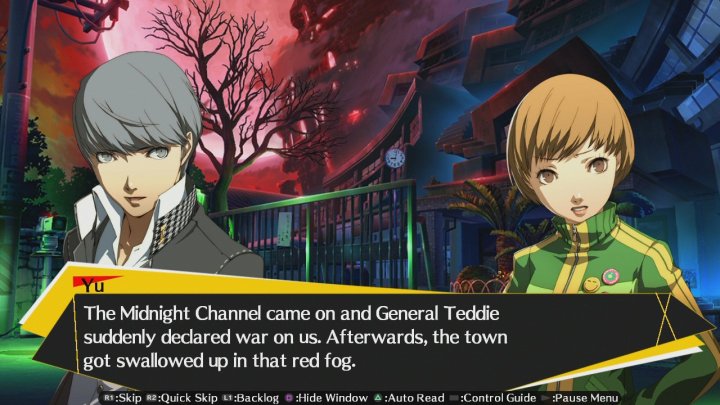 In terms of content, there’s plenty. Four modes of battle: Arcade, Score attack, Golden Arena and the important Versus mode. Golden Arena may seem like a Survival mode, but the gimmick takes the cake. You can level up stats- along with the all-important level-up screen with Period playing, and gain skills- all from the main game- and even have S-Links developed.

There’s a full-on Story mode, delivered Visual Novel style (you can even let the AI play all the battles if you just want to follow the story).  And there’s online play as well, with ranked ladders.

For better or worse, there’s plenty of DLC available for purchase. If you haven’t played P4 Arena, you can buy the previous game’s Story mode. There’s also DLC characters (one of them is a major spoiler for Persona 4- hopefully you don’t mind it) and other optional stuff, like specific character voices as support narration. 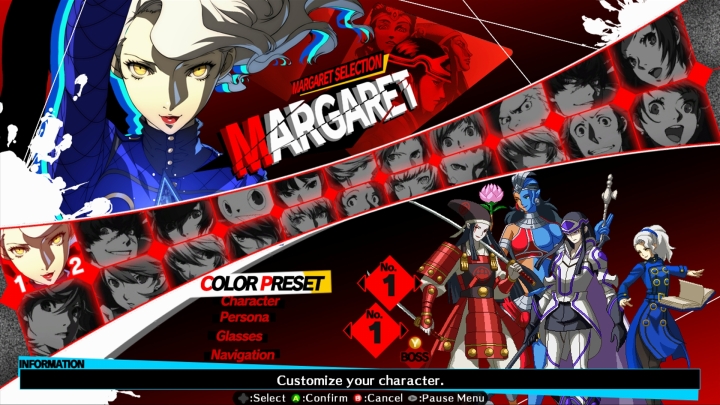 Persona 4 Arena Ultimax is a fine fanservice game, in the sense that it evokes all the things you love about the series in a different game genre. But as a fighting game, it stands out to be one of the competent ones. It’s no surprise the game is played in EVO, the biggest tournament in the fighting game community (FGC). It has a lot of depth for advance players to dig in, while still being accessible for newcomers, even just button-mashers,  to have a taste and enjoy.

And if you’re interested in watching some gameplay footage of P4AU with commentary by people who understands and enjoys the game, I recommend this video by the Super Best Friends. They will spoil that DLC character though, even if you skip ahead, so head’s up.

Looking for other PS Plus free games of the month reviews? I have you covered. Click here for a full list of games I managed to cover.