The power of polish: How a concise, perfectly executed game with limited scope score well with critics and the average gamer.

Uncharted 4 has finally released and it is now lauded with many positive reviews (except for that one review on Metacritic) from critics and everyday gamers alike. Just look at the accolades poster they made for all the warm reception they are having. 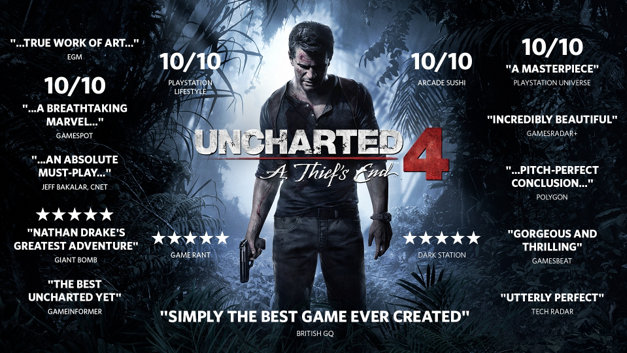 And they deserve it. While I have yet to touch the game (and trying hard to avoid spoilers) just from a few footage that was released as promotional material for both single player and multiplayer stuff, it is perfect. Not many critical flaws in gameplay were pointed out.

But then again, if you’ve played some of the previous games, you can see what essentially is a formulaic third-person action-adventure shooter with some platforming, set pieces and small  diversions here and there. It isn’t groundbreaking as say, Gears of War, that redefine how a cover system should work and the active reload system that added some dynamics to reloading a gun.

However, just look at the graphics and sound design. Look at how elegant the control feels. If played as how the developers intended, it just feels good.

That is the power of polish.